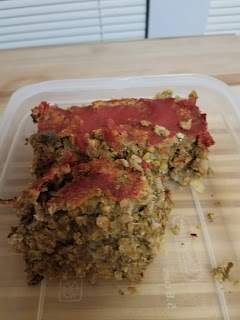 That's all that was left after the three of us ate this lentil loaf. It looks a lot like meat loaf, doesn't it? But it doesn't taste like meat loaf; however, it does taste good!

To cook the lentils, this time I used my new Instant Pot, but I had previously made this loaf by cooking the lentils in a pot of water on the stove.

To use the Instant Pot to cook the lentils I used this recipe by Platings and Pairings. I cooked them just as the recipes says, except that I needed to cook it a little longer, as my lentils were a little old. (I had to let the pot cool down a little bit before I could put the lid back on.)
Previously, to cook the lentils on the stove, first I rinsed them in a fine colander and picked through for any stones (this is the same with either method). Then I brought 2 cups of water to a boil, and cooked 1 cup of lentils, without added salt, until tender but not mushy.
In both cases, while the lentils cooked, I sautéed 1 small, diced onion (or ½ medium to large onion), in a bit of cooking oil on the stove.
Whichever way I cooked the lentils, I then put the cooked lentils in a bowl, added the following, and stirred it all together:
1 cup quick cooking oats
¾ cup grated cheese
1 egg, beaten with a fork
the diced onion which was sautéed and set aside
1 teaspoon garlic powder
1 tablespoon dried parsley
½ teaspoon paprika or smoked paprika
¼ teaspoon ground thyme
1-1½ teaspoons salt
¼ teaspoon pepper
I prepared a loaf pan with non-stick spray (or you could use a bit of  vegetable oil).

I put the mixture in the loaf pan, smoothed the top, and spread 4 ounces of tomato sauce on top.
I baked it at 350° F. for 40-45 minutes. It's best to let it cool for a few minutes before cutting.

Note: When I cooked the lentils on the stove, I used 1 cup lentils, but when I cooked it in the Instant Pot, I used the 1½ cups lentils that the Instant Pot recipe I shared, above, called for. It didn't seem to make much difference in the final result.

For your reference, and to give credit where credit is due, I adapted the lentil loaf recipe from a recipe called Really Good Vegetarian Meatloaf. I did make a few changes; for example, I have always liked my tomato sauce on top of a loaf, rather than mixed in, which is just my own personal preference. I think it gives it a nice finished look.
Posted by Simple Faith and Life at 5:52 PM No comments:

Visible Mending...and what do the words Boro and Boho have in common and how do they differ?

"Boro" and" Boho" are both words which are often used to denote a type of mending or preservation of clothing. They look and sound similar but have different origins.

"Boro" usually refers to a way of life which comes from Japan, where women traditionally used stitching to mend clothing again and again to make an item last until it almost had a new life of its own. Creating a simple beauty, it is characterized by neat, even stitches. The method of stitching is called Sashiko.

The word "Boho" comes from the word "Bohemian" and often refers to a style of clothing – and sometimes home furnishings - which uses rich and varied colors. In the recycling or up-cycling of clothing, people sometimes use colorful patches or combine parts from two different clothing items, one or both of which is often colorful.

In the history of my own country (the USA), we have "piecing" or "quilting".  Quilts were traditionally made from stitching together pieces of clothing that someone had outgrown or from the good parts that remained after an original item of clothing had worn out. Sometimes these were made into patchwork squares and sometimes they were made into varying shapes.

All of these methods of sewing have come to be viewed as forms of art. Some people today create, using these methods, but using all new materials. But there also seems to be a resurgence of using them for their original purpose, the preservation of fabric.

Here is a good video which explains "What is the difference of Boro and Sashiko?"

Mending Matters is a book which gives an interesting and useful look at using Sashiko for textile sustainability.

Do you use any of these methods? Have you come across other ways in which people preserve clothing? Do you ever combine more than one method?

I am neither enough of a perfectionist for Sashiko at this time, nor did I want this patch to be colorful; but I used "visible mending" to repair these jeans for one of my sons, using both a patch and visible hand stitching. I turned the leg inside out to sew on the patch. Then I turned it right-side out and stitched over the patch. The first picture shows the rip and the second picture shows the repair. 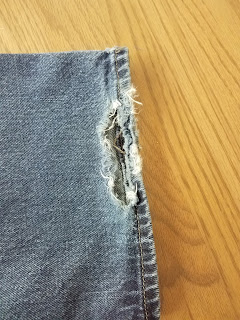 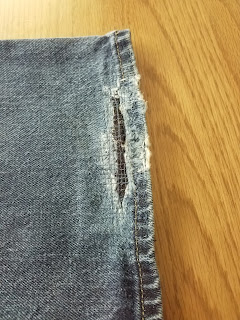 Posted by Simple Faith and Life at 8:32 AM No comments: 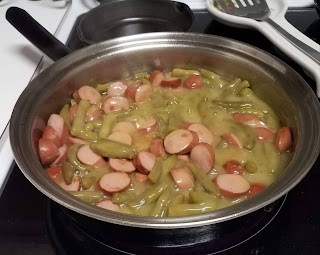 Serve over baked or boiled potatoes.

I made this just like my mom wrote it up, except that I mashed the boiled potatoes.


We thought it was delicious!

From A Vintage Pantry Cookbook, by Margaret Mary Myers

Posted by Simple Faith and Life at 4:29 PM No comments:

Why Three Cookbooks and What are the Differences Between Them?

At last, I have all three of my little cookbooks available for you in Kindle, paperback, and spiral formats.  You might wonder: Why three a...

I hope you might join me, as we "do frugal"...without guilt...trying whatever concepts we might like to try - you or I - at a given moment, just trying to keep it simply frugal.
You are also welcome to visit my other blog, Simple Life & Faith.

All original content is copyright 2007-2021 by Margaret Mary Myers. You may link to a post of mine, but please do not copy and re-post without explicit permission. Feel free to contact me to request permission for use at margmary53 at yahoo dot com. Thank you.